Marcelo Barbosa is an Artist and Maker.  His flat in Wandsworth, London is a testing ground for his work which looks at creating stylistic household products, which are very efficient and economical to run.  Here is a selection of his works in progress.

Water saving
Marcelo has been addressing issues regarding water consumption:


He has developed a system for capturing clean waste water and pumping it to a 150 litre storage tank to supply the WC.  The water sources include the first runs of hot taps from basins, bath and show, condensate from the boiler, captured rain water and even the final rinse cycle water from dishwasher and washing machines.

The tank is positioned at high level and supplies the WC by gravity.   Marcelo has fitted a 'Hydra' flush valve from Brazil which allows as much water as needed to be used.  Since it is all waste water, there are no restrictions on how much is used, and no fixed measures.


Environmentally efficient appliances
Whilst a student at Camberwell College, Marcelo developed an eco-fridge come intelligent larder. It's an insulated and airtight box, just like any other fridge, but with additional air vents to the outside. When the external temperature drops below 5ºC, the fridge compressors switch off and it draws naturally cold air. It makes sense. Why pay to run a fridge when the air outside can be used for free?

Marcelo is working with some 1960's appliances to see how they can be improved with greater efficiency. Early generation washing machines and dish washers offer technologies which are simpler and more accessible than more contemporary appliances. The retro styling works with his visions for his flat where each appliance is a distinct identifiable product (rather than a suite of similar items). The more manual approach to working these appliances makes it simple to divert cleaner rinse water to the WC tank. It also means wash cycles are much quicker, typically 25 minutes max. In addition they can be adapted to use less water.  Ever wondered if fully automated appliances truly economise on our use of time?


A 1930's French wood burning stove has been refurbished for a new position in the fire-place. Using wood as a fuel will help reduce his reliance on gas, and is more sensitive to the environment. To reclaim as much heat as possible Marcelo intends to run the steel flue internally as far as possible and use it like a radiator, before it discharges to the outside. He's even combined a ship's propeller with a dishwasher motor to act as an integrated fan to help circulate the heat. Fun stuff.


Making space
Marcelo admits he has a small flat and is creatively working with it to make use of every inch of space. His original kitchen was small. He says 'What can you do with a small kitchen? - Make it smaller!'  It makes sense because the resultant prototype has given lots of space back to the living room and made the whole arrangement feel open and light. The design is based on an aircraft galley. The worktops measure only 380mm across. All the services neatly reach their destinations without the need for service voids. To save material resources, all the materials have been reused from the original kitchen.  Waste and recycling units that tilt, rather than pull out, to save space.


The original bathroom is being replaced with a shower room relocated centrally in the flat to give greater window space to the bedroom. The shower room walls, only 50mm thick, contain services required for the WC, basin and shower. Because the WC is supplied from a separate tank, there is no cistern, saving further space. The space saving wash hand basin is fitted on a pivot and hydraulic arms so it can tilt out to be used like a standard basin.

Marcelo has even been taking items like stereo speakers apart and installed the profiled speaker heads on to his (slim) walls. This integration saves on the space needed for the appliance to sit in a room and makes the walls appear like stylish products themselves.


Progress
Bespoke measures like this illustrate that with a degree of thought we could work to radically reduce our reliance on the standard utilities of water, gas and electricity.  It will be interesting to see how far Marcelo's can take this and see how close a London flat in a Victorian house can get to becoming infra-free.

His careful attention to detail to ensuring that no space is wasted has resulted in allowing a small flat look deceptively spacious.

Marcello is not afraid to take a product apart and see how it can be improved.  His work illustrates how accessible technology should be and how for the majority of us, we simply use our appliances without much question, relying on the (perhaps wishful) notion that the manufacturer has optimised its efficiency.


Marcelo aims to complete his flat as a show-case of his ideas.  A web site is under development but in the mean time, more of his work can be found on Facebook.
Posted by DesignBox Architecture at 15:25 No comments:

Email ThisBlogThis!Share to TwitterShare to FacebookShare to Pinterest
Labels: Innovation


This is one of the most challenging areas of being an architect. It is also one of the most exciting and rewarding. It is vital to actively listen to understand the needs of Clients, user groups and occupants, to ensure the development of a successful design. Active listening involves searching for meaning and asking the right questions and this is achieved in the quality of communication.

We set out to interpret, evaluate and understand the information relayed to us at the beginning of a project and remain in close communication with our Client groups throughout the process.  The diagram above describes our approach to listening and how it relates to design.

Discuss
This is where we gather information on the project brief, background information, and take notes at initial meetings. We like to work as a sounding board to allow the Client or speaker to develop and articulate their thoughts on the project. The information gathering must be as complete as possible to enable the right connections to be made in the design process. We like to stay open minded and not rely on past work or preconceived judgements to influence the process. Our goal is to understand, because every project is different and every Client is individual.

Evaluate
Time is needed to absorb, assimilate and digest the information gathered, and work out how all the relevant parts best go together. Connections are made to answer the requirements of the Client and the brief, but also to see where additional value can be added to the project.

Respond
Draft proposals make an ideal opportunity to test and develop the design. Initial and developing design responses need to be as complete and as accurate as possible for this part of the discussion process. Highlighting how key project issues are addressed and keeping a close eye on project costs are important.

Add Value
It's important to offer some bright ideas to the project, ways in which innovation might be added to design. It is also important not to avoid any difficult issues and tackle them as a priority. Throughout the design process it is essential to keep listening to the Client and relevant peer groups, focusing more and more on detailed and personal specifics.  These are areas which are of value to them and often underlie bigger issues in the project.  In all areas of architectural design, development can take place on a personal level.  This is understandable.  Humans are social creatures and a central goal of the architectural profession is to build and reinforce the right social relationships. Discussions on a personal level are relevant and important.

Action
A comprehensive and coordinated set of production information produced by the design team leads the way towards construction.

DesignBox Architecture
At DesignBox architecture we believe there is no such thing as a silly question.  If in doubt we don't pretend to understand and we are not afraid to ask.  We're listening. Lets talk!

Posted by DesignBox Architecture at 07:14 No comments:

Further to our earlier post on QA, we have developed, with one of our Clients, an Integrated Management System, (or IMS for short).  It is proving useful because it works on a number of levels:
With greater engagement of the IMS in the office, its development should become more fluid with greater feedback on its operational performance and efficiencies.

As noted in the previous QA post, all policy documents relevant to the business, but required for reference (mainly), are centralised in the QA core documents section.  These break down neatly in to the following sections: 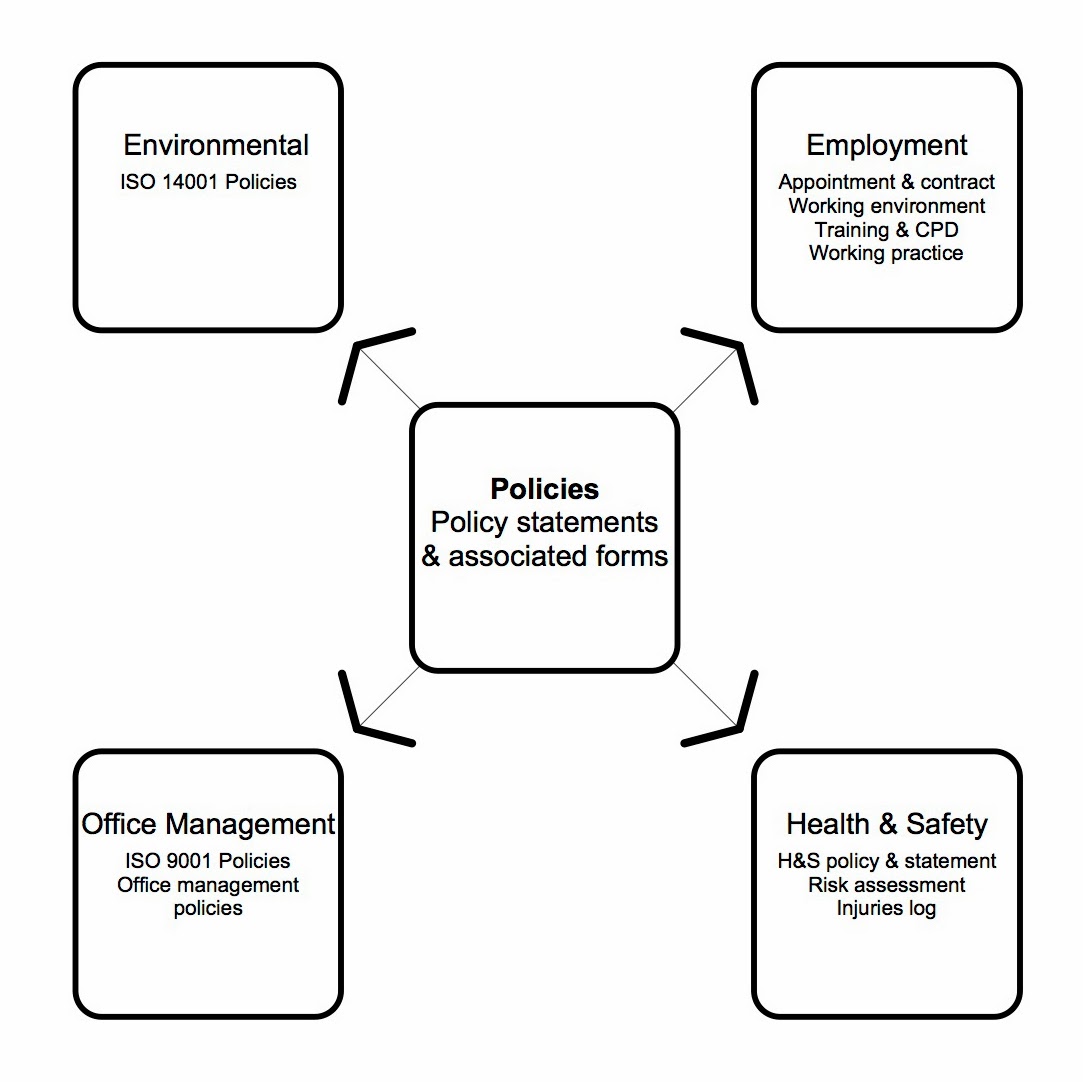 The official QA documentation needed to satisfy the requirements of BS EN ISO 9001:2008 has been greatly simplified.  Documentation needs to be efficient and relevant to the business.  The Quality Manual works as a very close response to BS standard.  The procedures document focuses on the six key procedures required by the standard:


The flow diagrams below should offer an insight in to the documents which they support.

The main body of documentation in operation within the practice is working files, used in the efficient support of project running or office management.

If this is of relevance to your practice, please contact us to discuss how an IMS can become an engaging response to a QA requirement.

Posted by DesignBox Architecture at 23:27 No comments: