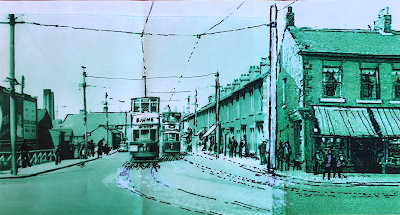 Trans on Scotswood Road. On one side are shops and houses.

On the other side are the railway line, river and the factories

of Vickers, Armstrong’s for shells and tanks.

The Scotswood area started to the west of the Central Station and Scotswood Road ran along side the River Tyne until it reached the Scotswood Bridge.  It was a long road that I remember walking when we visited my Aunt’s house.  It was long, busy, black sooted but had some good shops and lots of pubs.  My Aunt lived in the back to back houses that stretched from the Scotswood Road up to the steep banks of the Tyne towards Elswick and Benwell.  Elswick, Benwell, and a bit further up the bank, Wingrove and Stanhope Street were a bit posher than the areas of Scotswood.  However, some of the houses in Scotswood dated back to early Victorian times and boasted cellars, an imposing entrance up a number of stairs, big windows and big rooms.  My Aunt by comparison lived in a small ground floor flat with a living room, a kitchen and two bedrooms.  There was no bathroom; the lavatory was in the back yard next to the coal house.  Lighting was by gas and in the evening the lamps hissed above the general conversation.  My cousins were noisy and street-wise.  They had black hair like their father and were dark skinned.  Uncle John was fierce and tough and stood no nonsense from the neighbours but was always ready to help if there was anyone in trouble.  He was a great union man and capable of nicking anything left lying about.  Scotswood was a bit like my Uncle John; tough, without airs and graces, fierce in defence of his beliefs and a bit suspect when it came to living by the law of the land.

My family was moved by Newcastle Council from Elswick and with other families from Scotswood were given new homes on the Blakelaw estate next to the northern parts of the Town Moor.  The house had an upstairs and downstairs, a living room, scullery with a pantry, three bedrooms and a bathroom.  It had a garden at the front and at the back which were roughly marked out by wooden posts and wire.  It was 1938 and we had electricity!  All of our neighbours were new to us. None of us had moved with people they had lived closely with in Scotswood.  We were from the Elswick area, top of the West Road bank from Newcastle’s Snow Street.  We thought we would know some of our new neighbours but we didn’t. We were a new community that had to get along with each other in our cul-de-sac of houses in Murrayfield Road.  We were a motley lot.  Some found adjusting to the new houses very hard.  Our immediate neighbour was a rag and bone man.  He housed his horse in the scullery until the Council found out.  Bugs from the heaps of old clothing he piled up outside his back door began crawling along the back walls of the houses.  I had never seen bugs like those before.  Adjusting to having a front and a back garden was a novelty for the residents.  Agreeing the extent of each patch and keeping them cultivated and tidy became a new focus of communal attention and  contention.  Another change was the lack of shops.  A lean-to hut and a house converted into a shop were the only facilities for the whole estate.  These were located at the far end of the busy Portland Road which was a hike for both adults and children.  A Co-Op existed even further away in Cowgate.  We attended Cowgate School near Fenham which was another hike each day. The Council improved housing but neglected community amenities in their plan, especially for the kids.

The Moor was a great boon for us.  Its space and freedom were something novel, and we enjoyed it.  As a gang, the children of Murrayfield Road discovered that over the Moor, in the South Gosforth ‘posh’ houses, there was a small park with swings and a slide.  We trecked there for a while and enjoyed the playground until we were chased off by the South Gosforth residents.  Acceptance of the community did not come easily, after all they had come from Scotswood!  Even on public transport there was a separation social groups.  The No. 4 bus to the centre of Newcastle was always crowded.  The No. 5 service to Newcastle ran on the same route but the closest stop was outside Blakelaw which missed out our estate. You paid more on this bus and it was used by people from Ponteland and Darras Hall.

Newcastle Council were recognising that they had to address the amenities of our estate when the war came along and all plans were shelved for 5 yeas.  Apart from a new primary school, change was slow.  The community had gelled well but self help was expected.

Later, in the 1950s, more people from the Scotswood were decanted in to the Montague Estate and Denton area and the new residents seemed to experience similar issues of cultural  change as us.  Money was scarce, the post-war years were lean and Newcastle council at that time was not really tuned to think of community assets to attract residents to the area.

The original community of Scotswood was tough.  It was not always pretty, but it was alive and vital.  Planning and action by the Council tied to breathe life in to the Scotswood community with improved housing, but also in the process, a re-engineered community culture and controlled social hierarchy.  I wonder how much of what they delivered to this community was working for the community’s benefit.

Posted by DesignBox Architecture at 07:47