DesignBox Architecture has completed work for the extension of two adjacent terrace houses on the Rowan Park Estate, London SW16.  For each house, the living room and dining rooms were extended to meet the existing back line of the house. 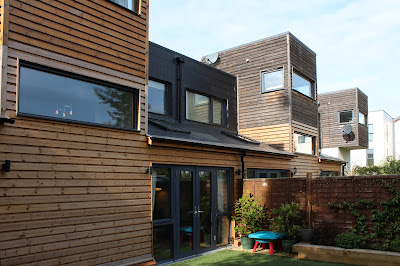 The Rowan Park Estate was completed in 2014 following the Government's Design for Manufacture Competition.  The estate is an acclaimed example of building to high standards of environmental sustainability.  As an extension project it was not a convention build.  Careful attention needed to be paid to the existing building fabric to ensure properties of air tightness, thermal resistance and acoustic separation were maintained and enhanced.  Building systems and external materials were used to match the original build. 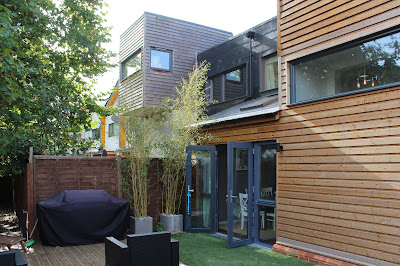 The works added 20m2 to each house and some much needed living space for two growing families.

Posted by DesignBox Architecture at 19:39 No comments:

DesignBox Architecture is proud to be sponsoring Hackney Wick Academy South FC for the 2017-2018 football season.  Hackney Wick South (formerly London Bari) is a community focused semi-professional football academy in South-West London.  Run by volunteers, it ambitiously follows an inclusive approach to football at grassroots level.  The young members in the Academy currently play in the Tandridge Youth Football League.  We wish them all the very best of luck for the season ahead. 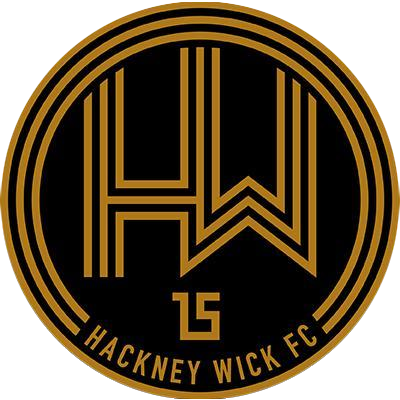 Posted by DesignBox Architecture at 21:22 No comments:

DesignBox Architecture is pleased to announce the completion of the refurbished Lansdowne Centre in Stockwell, London SW8 for LDN Group.  The newly revitalised building now facilitates specialist and industry-relevant IT courses for a range of age groups starting with 11 year olds.

The Lansdowne Centre includes a new reception with kitchen, three flexible classroom spaces, one-to-one study and interview booths, an IT  suite and administration offices.  All was achieved to a very impressive budget.    LDN Group work to inspire young people to achieve their vocational goals and ambitions and the newly refurbished Lansdowne Centre definitely works to support that.

Posted by DesignBox Architecture at 06:35 No comments:

Hampton School have included an article in their School Journal on the year-8 Art and Architecture workshops, with DesignBox Architecture:  https://hamptonschool.org.uk/2017/01/architect/

The series of workshops was very hands-on, working with materials to make models and full size structures from initial design concepts for a shelter.  The class found this engaging and expressed lots of enthusiasm.  Succeeding in the challenge to realise their designs on a large scale became a highlight of the process.  One intention was to demonstrate  the significance of Art based subjects in the support of Maths and Science.  In Architecture most everything is connected. 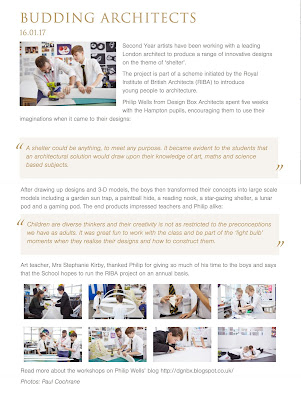 This was carried out  in conjunction with the RIBA Architecture in Schools Programme.

Posted by DesignBox Architecture at 06:34 No comments:

Email ThisBlogThis!Share to TwitterShare to FacebookShare to Pinterest
Labels: Architecture for Kids


With this year’s Architecture workshops with Year 5, at Furzedown Primary School, we asked for some feedback to gain some insight in to what the children thought was relevant and engaging.  The results revealed many issues which were important to them.

The sequence of workshops included experiments with structure, 3d drawing, model making and working with larger kits of materials.  Each workshop was held so that there was a brief introduction to the subject area and a review at the end, leaving as much time as possible for the children to experiment and develop their ideas.

The tasks given were not too prescriptive, but introduced the children to the basics of a subject area and presented them with a challenge which could be interpreted in many different ways.  The overall focus of the sequence of workshops was to investigate designs for a shelter.  As usual, the creativity and enthusiasm of the children took their work in unexpected directions.

Their feedback is of great value to help understand what they found most engaging and most challenging.  It also highlighted ways in which the workshops might be improved in the future.  We were given some expected and surprising responses:

I made an origami den and a Sun Dome.  I could have improved my Sun Dome Dome by making sure every time I put it up it doesn’t fall down.  – Understanding how materials work and go together, and thinking about how to improve their own creations.

My Favourite part was going outside to make different structures. – When the weather was right, working outside was always a favourite activity.  Working in groups the children were able to make some large structures together.

It taught me how to make mini structures and has inspired me to make some things at home. – We chose materials for the models which were readily available, (and mostly items for recycling).  It is encouraging that they might take their ideas and knowledge home to develop further.

We made structures out of magnets.  I found it quite easy because you didn’t have to plan it, you made it up as you went along. – A great way to experiment: Create first and then assess it later.

My favourite thing was drawing on Axonometric paper.  At first I found it difficult but I caught on soon. -  The ‘light-bulb’ moment when the children realise something new.

I really enjoyed building structures outside, even when it didn’t work out. – Experiments don’t always lead to success.  When things didn’t work out the  way they expected, there was still just as much to learn.

You taught me that patience is the key to building a structure.

My favourite bit was when we had to plan our own designs. – Being a designer and in control of their ideas was important to them.

I learnt that not all buildings around the world are made of the same material. – A useful insight in to children’s preconceptions in to the world, which we forget as adults.

I enjoyed using the 3D pens to create a building. – Looking at different ways of thinking and creating in three dimensions was important.

You could make the lessons more fun by making the slideshow shorter because we really wanted to get on with the fun of the work you planned. – Great advice.  Children pick up information quickly, process it in their own way and their enthusiasm generated lots of creative energy.

I would make it better by explaining more about the slides shown to us. – A counter-argument to the above.  Every child is different.

It was really fun. – To me this might be the most important quality to capture in the workshops.

My favourite bit was drawing 3D shapes.  My shapes turned in to a building picture called the Crystal Flats. – The children engaged with the process that a thought can be captured in a drawing, developed with one or several media and become a conceptual building design.  The media helping to inform the possibilities of the idea.

I enjoyed doing the construction kits. – At both model full scale we had a number of kits for making different structures, enclosures, shelters and dens.  They were great for getting the children started with a construction concept, but their creative energy quickly took over and made a whole lot more out of the kits, often combining them to create more even adventurous designs.

I learnt that Architecture isn’t as boring as it seems and doesn’t take up much of your time. – Oh dear! I'm not sure where this came from.  Poor kids, they'll learn.

Posted by DesignBox Architecture at 15:21 No comments: