Marian Bowley wrote two very revealing books which relate to architecture:  Innovations in Building Materials; an Ecomonic Study (1960) and The British Building Industry; Four Studies in Response and Resistance to Change (1966). She charts the development of the Brititsh building industry through industrialisation and two world wars and examines the needs at that time for innovation and progress to meet the demands of housing, education and expanding commercial worlds.  She identifies examples of progress but also many key obstacles forming resistance to change.  Half a century later it is worth a note to ask how much has actually changed.

The post Second World War period was an important time of reconstruction and much innovation and technological developments had been achieved as part of the war effort.  It is interesting to note what Marian Bowley finds in relation to how the building industry moved forward.  The core of her argument looks at the professional structure of the industry and the relationships that exist between client, design professionals and builder; what she calls the 'outworn patterns of organisation' (BBI p441).


The design team
A lot is said about the working methods of design professionals and lack of progress.  She says the structure of the profession as a whole worked to inhibit innovation.  The dis-junction between architects and structural engineers is one example.  Architectural aesthetics are shown separate to structural and technological requirements; cladding in stone over steel frame makes reference to a more 'crafted' look expressing accepted aesthetics.  Where developments in architecture occurred, they often followed structural developments, after a delay.  In general each party in the design team was working with a strict, distinct and separate set of materials and construction methods.  There are individual cases of inspiration where the teams worked together to create innovative products such as the Crystal Palace pavilion which championed patent glazing and even composite structures and was revolutionary for the time.

The architectural profession
Inertia from the design professions is noted by Marian Bowley.  For example Ruskin was not a fan of the Crystal Palace pavilion.  Not long after industrialisation and the development of mass produced bricks, the Arts and Crafts movement came along in reaction, championed by William Morris.

She notes a key issue being the RIBA's 1887 charter identifying that the Architect was to be the Client's agent, and not to be directly linked to the Builder.  This gap between architect (including design team) and builder meant that no parties had any direct economic incentive to innovate to reduce costs, improve technical efficiency or the aesthetic qualities of design.  It made for an antagonistic rather than a co-operative relationship.

My favourite section of her book The British Building Industry is her account of the opportunities missed after the Second World War.  In 1941 the Ministry of Works appointed the RIBA to orgainse a set of committees to investigate the opportunities of innovative developments from war time building (prefabrication, modular buildings, large span construction, new materials etc.) and assess their merits for use in the building industry going forward.  Led by the Government, other industrial sectors offered assistance with the post war building effort, focusing on ways to improve construction, save time and money and introduce new materials and technologies.  The RIBA committees consisted of architects and engineers, but builders 'were conspicuous by their absence' (BBI p90).  The committee on Walls, Floors and Roofs saw no real justification in reinforced concrete, discussing the benefits of traditional building practices instead.  The committee on the Architectural Use of Materials reported on the merits of natural stone, 'probably the least economic of all building materials indigenous to this country' (BBI p93), at the relative dismissal of all other innovations.

The Builder
The dis-junction between the builder and the design team is highlighted as a major inhibitor of innovation.  The builder assumes all the risk in a project under a traditional contract, and is therefore unlikely to take on any liability which can not be justified.  The builder is also under little pressure to innovate to improve construction time or reduce costs, because they are working to prescribed drawings and specifications set out by the design team.

The Client
Marian Bowley's account describes that clients were not given the opportunity to select innovative solutions because of inertia from the design professions, and comparative cost analysis was often inaccurate.  Although many innovations were ultimately cost effective, or quicker to construct, the process of developing ptototypes to market was expensive and few in the industry had skills ir incentive to undertake such work.

Innovation draws
Lack of innovation in the building industry is described not as a lack of technology available but as a lack of stimulus within the design professions and their relationships with client and builder.

Marian Bowley describes that the biggest draws for innovation in the building industry occurred where the profession had to deal with new building types such as large commercial office buildings, or when the post war shortage of steel meant that techniques in reinforced concrete structures had to be developed - even though the technology had been around for some time and was proven to be more cost effective.  This became a one-way process and reinforced concrete structures established their place in the post war period and in the building industry.  She also describes examples of innovation from abroad having an influence in the UK.

How much of this rings a bell today?
How much has changed in the last 50 years?  As a student at the Bartlett School, UCL, we worked and studied in relative isolation, unaware of the wealth of knowledge that lay around us in the adjacent Science and Engineering faculties, or at the Slade Art school.  This is changing now, with links through the Institute of Making, for example.

Working on cutting edge projects, I remember architects and structural engineers fighting fiercely like cats and dogs, only pausing once in a while to scratch heads and work out where all of the services kit could fit.  Each discipline had their own protected areas of work and co-ordination distilled in to the brackets between these realms.

In the architectural press there is lots of coverage of contemporary design, but looking at the last few covers of the AJ there is lots written about timber, brick, stone and glass, although it is good to see aluminium, FRP and corten steel (noticeably on projects outside the UK).  One-off projects still continue to be the norm when it comes to advances with innovation.

Investigating measures the RIBA are taking in innovation, their Research and Innovation Group works to make connections between the profession, schools of architecture and the world at large - although sadly it does not directly mention building companies.  Should these bridges have been established a long time ago and we should we now be thinking about how to manage this knowledge, rather than how to achieve it?

Innovation and experimentation appears to happen more on new building types, such as bridges which are using composite FRP structures more as standard, for example.  On tried and tested building types such as housing, I noticed Alan Shingler's article in the AJ 14.03.13, stating that although much technology has been invested in to the housing sector, very little has changed in mass housing over 30 years.

The gap between the architect-led design team and the builder has always been a fundamental issue which various people have tried to close.  The Latham and Egan reports were met with some resistance from the Architectural profession because of dissolution of their authority, but it might be argued that the we are not exactly helping ourselves to retain centre stage in the building industry what is gradually trying to side-line us, by clinging on to these outworn patterns of organisation.

In the mean time, hands-up who's looking forward to the Natural Stone Show next month? 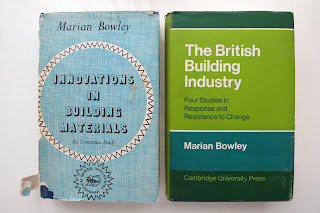 Posted by DesignBox Architecture at 23:46

Email ThisBlogThis!Share to TwitterShare to FacebookShare to Pinterest
Labels: Innovation